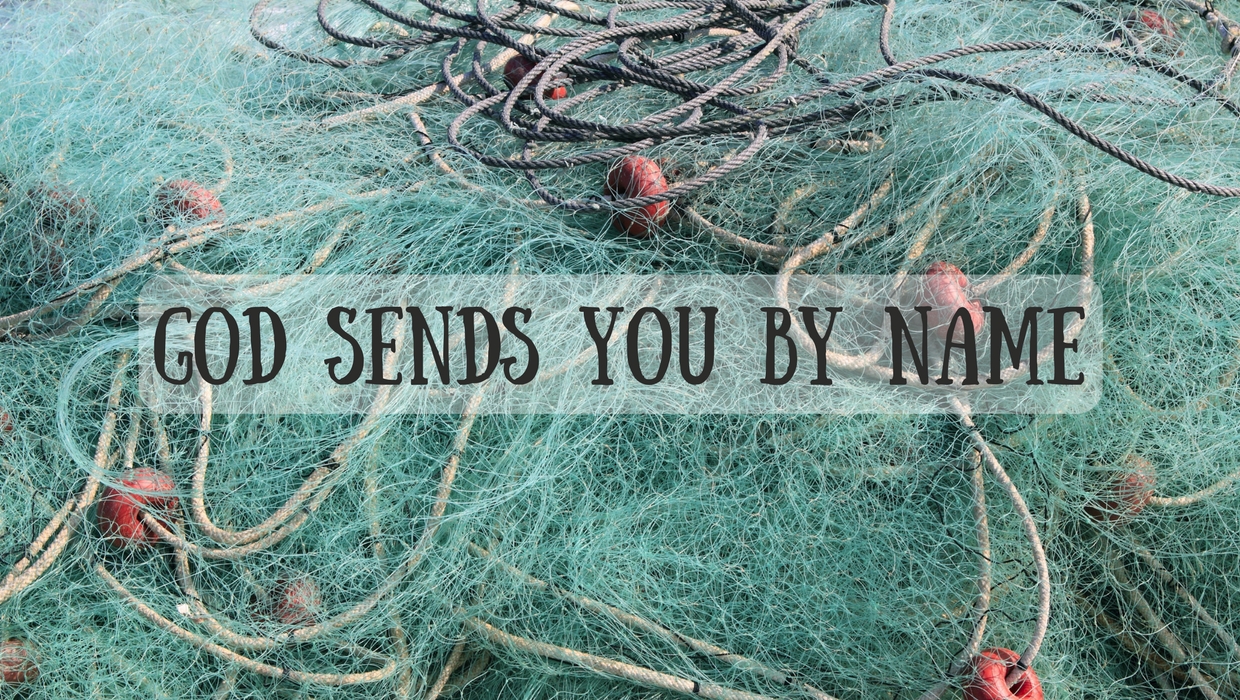 A sermon shared with my congregation tonight…

In Mark 1:14-20, Jesus walks beside the Sea of Galilee and calls his first disciples, Simon, Andrew, James and John. (This Simon would later have his name changed to Simon Peter, or just Peter.) Verse 17 says, “Come, follow me,” Jesus said, “and I will send you out to fish for people.” What would your response be to that? Firstly, Jesus is calling them away from what they were doing, fishing, and calling them to “follow me”. I can imagine Jesus walking about the beach, spotting one of his future disciples, pointing at them – ‘hey you’ – and then pointing back towards himself – ‘come here’.

But it continues, not only is Jesus calling them towards himself and away from what they were doing, but he then tells the men ‘I will send you out to fish for people’. Jesus wants to send them on to something new.

How would you respond to that? Excitement? Fear? Would you pay attention or ignore? For those of you who have been leaders at Day Camp this past week I imagine that you got a variety of responses from kids at the end of break times when you would call out to them to “Come, follow me, and we will go back to our room to do craft” for example. There would have been the very happy and agreeable kids who listened and followed and left what they had been playing with. And then there would have been the kids who responded a little differently… (wink)

Well, I have a confession to make. Last Saturday while the adult voice inside my head said that it was time to leave my relaxing and go and vacuum the house, do some laundry, clean the bathroom, or study…instead I found myself watching the Disney movie Moana.

While it is not a Christian movie, I started to spot connections between the movie and what it means to be sent. I think sometimes we can be really quick to watch a secular movie or TV show and forget that there might be things that we can learn about God in it. We can forget that God infiltrates every part of our lives, it’s just a matter of whether we spot it or not. And in the same way that some indigenous Christians will tell how their traditional dreamtime stories point to God, this Disney movie that is loosely based on Polynesian mythology can also point to God.

Without risking any spoilers, the movie is about “an adventurous teenager [who] sails out on a daring mission to save her people. During her journey, Moana meets the once-mighty…Maui, who guides her in her quest to become a master wayfinder. Together, they sail across the open ocean on an action-packed voyage, encountering enormous monsters and impossible odds. Along the way, Moana fulfills the ancient quest of her ancestors and discovers the one thing she always sought: her own identity.”

The movie revolves around a young teenage girl who is questioning her identity, or to use the words that I referred to earlier tonight, Moana is questioning who she is called to be and where she is being sent.

Moana’s challenge, and it might be a challenge that you are facing too, is that her dreams weren’t the same as her father’s. Moana felt that she was being called [note that word again] to leave the island, that she was being called to the ocean. Those of you familiar with the movie might recall the song ‘How Far I’ll Go’ – “See the line where the sky meets the sea? It calls me”.

Sometimes, we might find ourselves called to things that don’t line up with the expectations that others have of us. While Moana felt an expectation to stay on the island, she felt called to the ocean. Inversely, for the four men in our bible reading today their families’ expectations for them was likely that they would follow the family trade and be fishermen, and yet they are called to the land.

At the same time, there will often also be people around us that it is valuable to listen to. For Moana it was her grandmother, who was very much a role-model and mentor-type figure in Moana’s life. Can you think of anyone in your life who might be like that? At the beginning of the movie there is a scene where there is a unique interaction between toddler Moana and the ocean, which Gramma Tala witnesses. Years later her grandmother keeps reminding Moana of this, that ‘the ocean chose her’.

Sometimes the people around us might observe things that can hint at what we might be being called to.

Some of you may know that while I’ve been studying theology at Uniting College, for the past 12 months I’ve also been doing something called a Period of Discernment. A Period of Discernment, abbreviated to a P O D or PoD, is, funnily enough, a period of time set aside for discerning or exploring where someone might feel they are being called or sent. Within the Uniting Church there is the understanding that all who have been baptized are called into ministry. This ministry might look like being an ordained Minister of the Word, but it is not just that. It might also look like being a worship leader, or an elder, or a youth leader, or be something within your school, or at uni, or where you work. I’ve spent the last twelve months consciously reflecting on where I feel God is sending me, and I’ve discovered that it’s not something that there is always an easy or obvious answer to!

Earlier I mentioned how Moana felt called to ‘the line where the sky meets the sea’. Have you ever tried to pinpoint the exact place where the sky meets the sea? Or how about the place where the end of the rainbow is? I think sometimes what we might feel called to might be that fuzzy. You might be able to see it and point in its general direction, but not be able to quite define exactly where or what it is. Maybe we can feel called to something and yet not truly know what it is going to look like or where it is going to lead us? But maybe the fact that we can just point towards it is enough, enough to know what direction to start towards.

One thing that I’ve been reflecting on during my Period of Discernment is what my story so far tells me, what the experiences that I’ve had, the scars that have formed, the skills that I’ve learned, might hint towards.

There are some powerful lyrics that Moana’s grandmother sings to her at one point:

I know a girl from an island.
She stands apart from the crowd.
She loves the sea and her people.
She makes her whole family proud.
Sometimes the world seems against you.
The journey may leave a scar.
But scars can heal and reveal.
Just where you are.
The people you love will change you.
The things you have learned will guide you.
And nothing on earth can silence.
The quiet voice still inside you.
And when that voice starts to whisper.

Moana, listen, do you know who you are?

“Lord, you know everything there is to know about me.

You perceive every movement of my heart and soul,

and you understand my every thought before it even enters my mind.

You are so intimately aware of me, Lord.

and you know all the words I’m about to speak

before I even start a sentence!

You know every step I will take before my journey even begins.”